An Advent course in three sessions exploring the original history of Jesus’ birth — with videos filmed in the Holy Land, and reflection questions at different levels. Our modern Christmas celebrations can obscure the significance of the original event. Some even doubt its rootedness in real history. With this three-part series, filmed on location in the Holy Land, we will discover the facts, see the places and be given many new insights to discuss and reflect on. Guided by Dr Peter Walker—a Bible teacher, academic theologian and expert on the history of the Holy Land—we will travel over three weeks from Nazareth to Bethlehem. We will see the likely site of Jesus’ childhood home, the shepherds’ fields below Bethlehem (known by the young David 1000 years earlier), and finally arrive into Manger Square to discover the traditional site of Jesus’ birth.

Lovers of Lincolnshire history now have a wealth of new stories to discover - online and on foot - as the award-winning Market Rasen Heritage Tour and Website expands from 14 stops to 20, this April. This has been made possible by the addition of six new stories focusing on “Wolds Women of Influence”, taken from an exhibition of the same name which proved a great success when launched in 2018.

The women featured are from all walks of life, from landed gentry to publicans, headteachers to shop owners. Each have left their mark. Some locally, some nationally and some even globally.

Also included in the update is a fascinating 12-minute video that reveals how local woman Louisa Boucherett helped many children from the Caistor Workhouse, making her, perhaps, one of Lincolnshire’s most unsung heroes.

The website can be found at www.marketrasenheritagetour.co.uk, where visitors can explore a vintage map of the town and (from April onwards) find the women’s stories by clicking on blue bonnet icons.

Six new plaques have also been placed in and around the town at locations connected to the women, to give a companion walking tour. The plaques all have QR codes linking them to the story pages of the website. They join 14 existing plaques in the town, which means Market Rasen now has a 20-stop heritage tour to satisfy even the most ardent history buff.

Who are the Women Featured?

The website also offers PDF versions of each story that can be downloaded, to share or display offline. www.marketrasenheritagetour.co.uk,

Remembered fondly by former pupils for her role as principal of Market Rasen’s Sheffield Manor School, Miss Gledhill was also one of the instigators of the Market Rasen Festival, a highlight on the town’s cultural calendar from 1944 through to 1976.

For many years Caroline Smith ran the White Hart Hotel in King Street, which can be found close to the Market Place in Market Rasen. Mrs Smith is believed to have taken over the hotel around 1901, managing it until around 1940 when she passed away at the grand age of 94. By the late 1930s Mrs Smith was considered the ‘oldest licensee in England.’

The 1841 census lists her as living above a shop in King Street Market Rasen. The shop is still there today. She dealt with the sadness of losing many of her children and her husband at an early stage in her life and built up a successful business within the town, prospering enough to retire in her early 50s.

Councillor and Alderman. Among her many contributions to the town, Alda Nettleship opened Market Rasen’s Mill Road public library back in 1971. This is the same library that you can visit today! In its first ten weeks of service, the number of books issued at the new library increased by 70% to nearly 2,000 a week, compared to figures achieved at the congested and inadequate premises the town’s library had been using on King Street.

Marjorie Myers was a successful local businesswoman. Misses E & M Myers, Children’s Outfitters of Union Street, was a fixture in the Market Rasen high street for many years, clothing the children of the area from the 1930s through to the 1960s.

Jessie Boucherett lived in the Lincolnshire Wolds area, in a large house that used to stand in Willingham Woods. She played an important role in the Suffragists (NUWSS) movement, a British organisation that campaigned for women’s right to vote, and still campaigns for women today.

Louisa Boucherett was Jessie’s sister. Concerned by the plight of young children living in the harsh workhouse regime, Louisa pioneered a system of ‘boarding out’ children to local families, and she vetted and supervised these placements herself. The system of boarding out was a forerunner of the concept of foster care. 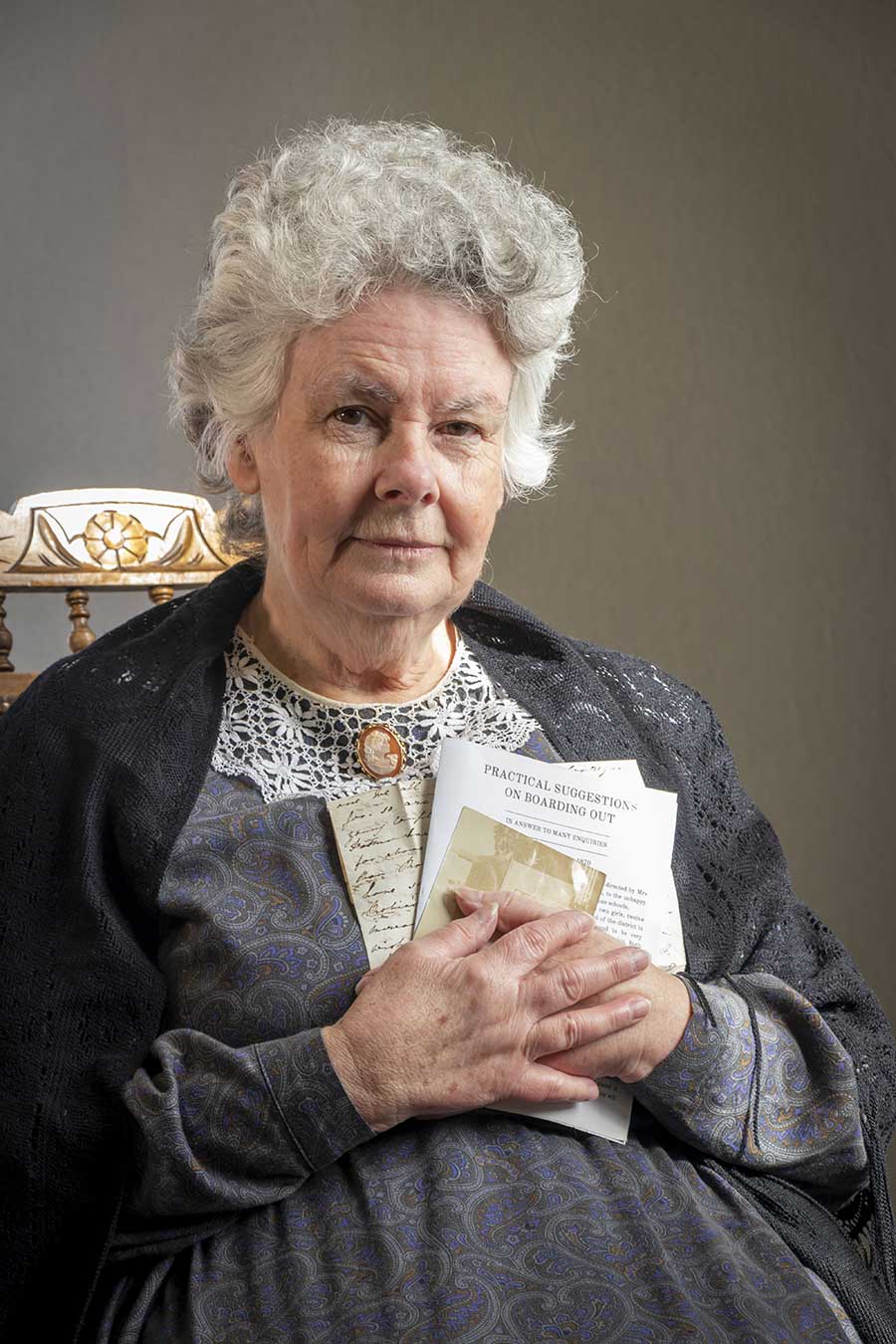 Gail Dennis of the Lindsey Rural Players appears as Lousia in the video Louisa Boucherett and The Caistor Workhouse Children, viewable on the new website. Images by Ashley Taylor / Push Creativity 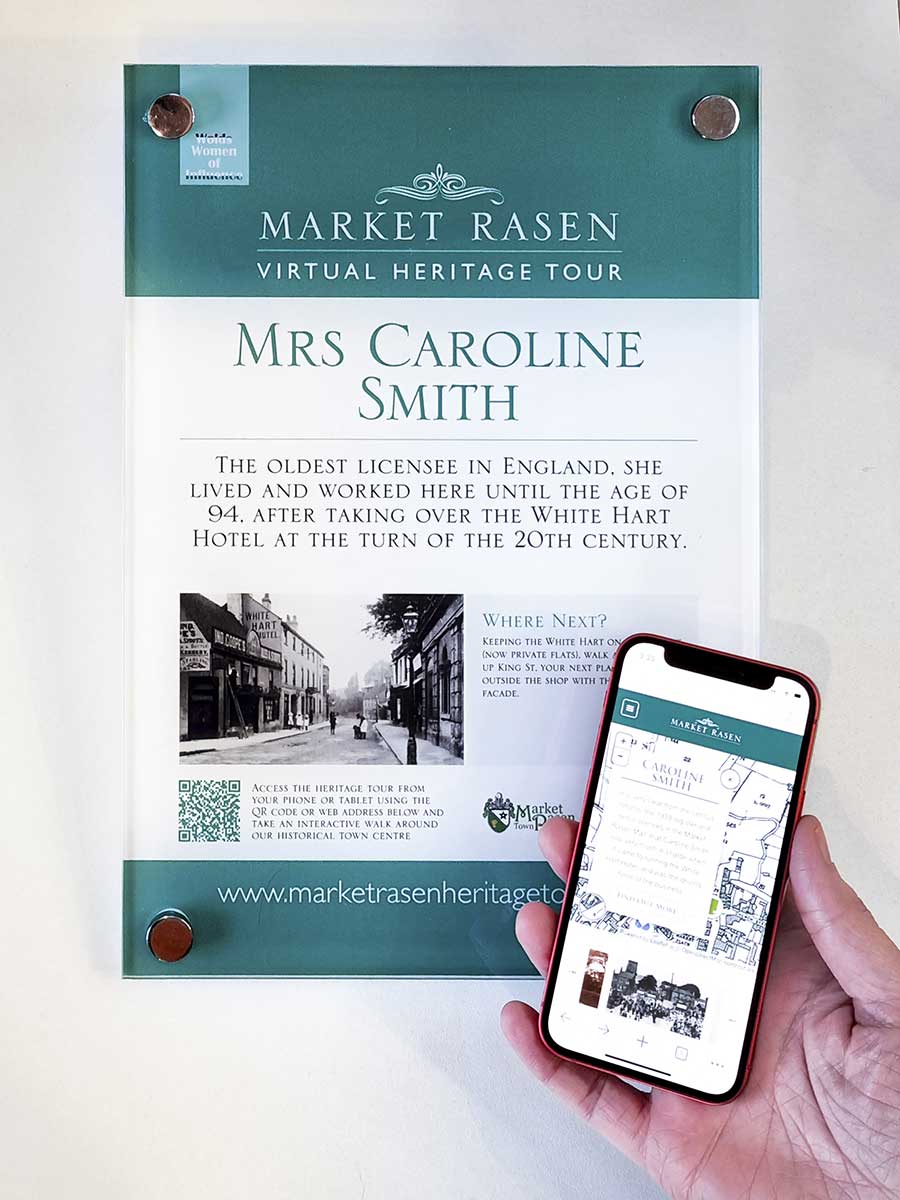 One of six new heritage tour plaques with QR codes, now visible in Market Rasen and focusing on “Wolds Women of Influence'. These extend the tour to 20 stops. 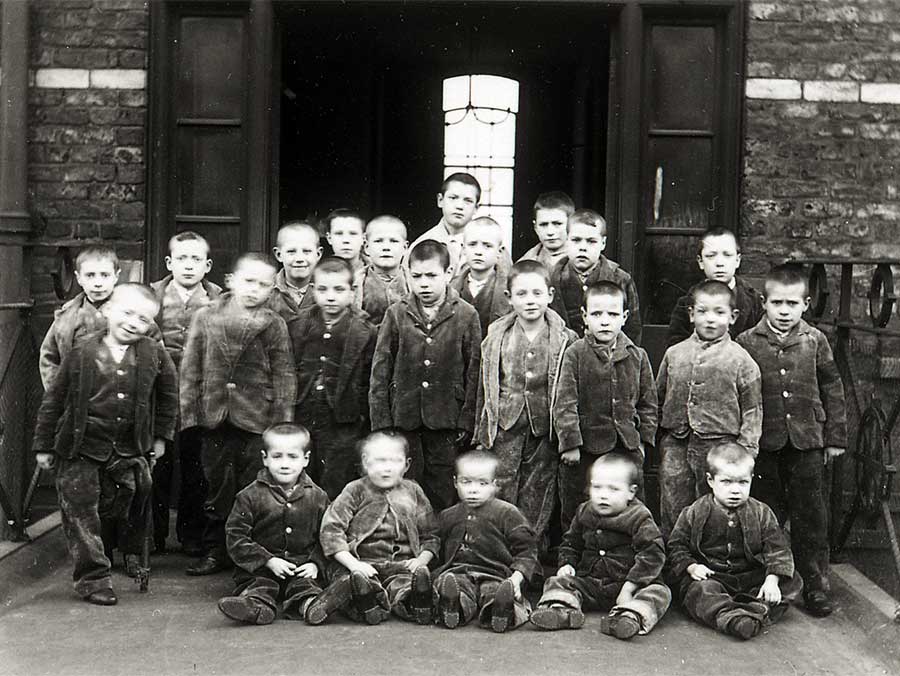 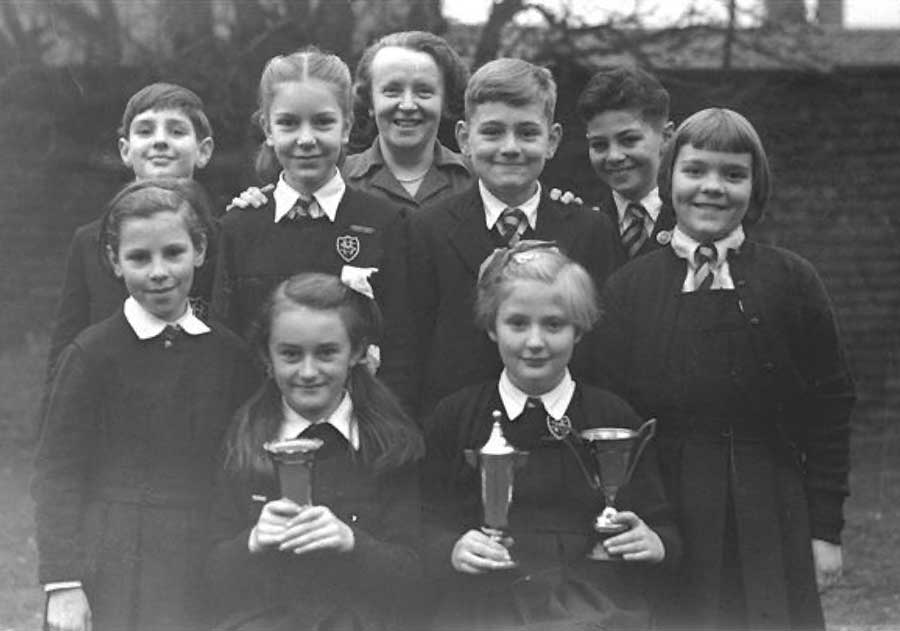 Winifred Gledhill (middle, back), principal of Sheffield Manor School, Market Rasen, with pupils and trophies from the Market Rasen Festival. Permission is given for use with this publicity work by Rase Heritage, source Market Rasen Mail, Plate 86 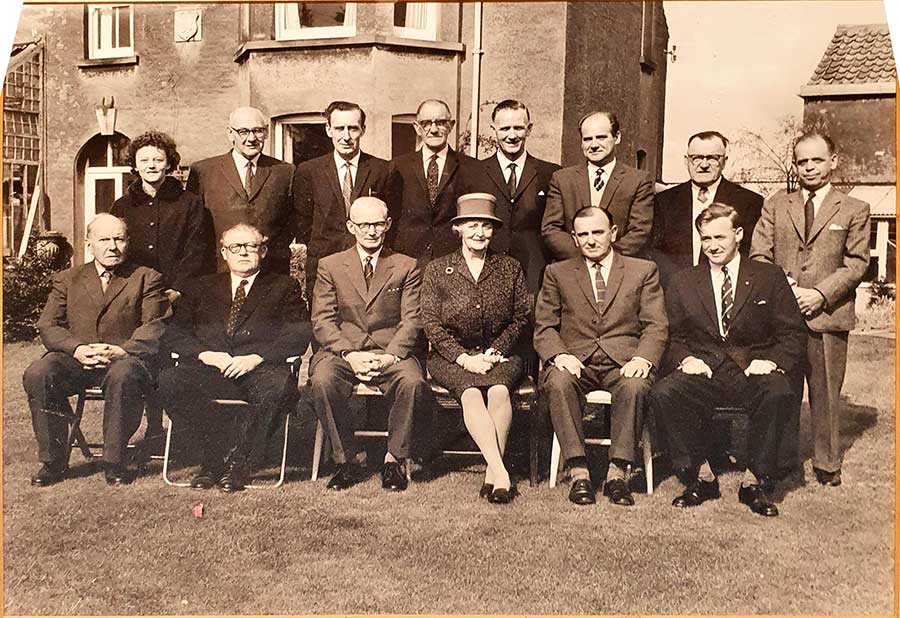 Alderman Alda Nettleship (front row) within the Market Rasen UDC (Urban District Council) 1964-5. Permission is given for use with this publicity work by Market Rasen Town Council

One of the most exciting aspects of Lincolnshire history that the project has brought into the spotlight focuses on the real-life Victorian children from the local workhouse and the woman who helped them, Louisa Boucherett of Willingham House, a grand country house that once occupied Willingham Woods but was demolished in the 1960s.

The video can be viewed on the Market Rasen Heritage Tour’s YouTube Channel at this link https://youtu.be/R6DE8q-Ij3o or by searching YouTube for ‘Louisa Boucherett and The Caistor Workhouse Children’.

This story was uncovered through the original PhD research of Dr Caroline Mogg, for the Wolds Women of Influence Exhibition in 2018. In the video, the part of Louisa Boucherett is played by volunteer actor Gail Dennis of the Lindsey Rural Players, who reads through original letters and papers to tell the story in Louisa’s own words.

But the video also brings the past to life with help of modern-day local children, who lent their faces to the project so the workhouse children could be fully represented.

“The scheme pioneered by Louisa to help these children was called Boarding Out, and she was among the first people in the UK to try this approach,” explains the video’s creator Angela Montague, of Market Rasen based production company Push Creativity. “Boarding Out is a forerunner of the foster care system that is used worldwide today, so we were very keen that the importance of Louisa’s work and the workhouse children’s stories are known by a much wider audience. But, because these were extremely poor children from the 1860s, we did not have any photographs of them to use in the video. So, we ran a competition, through the Market Rasen Community Partnership and the Market Rasen Mail, to ask local children to ‘lend their faces’ to children from the past.”

Many local children rose to the challenge and sent in photos of themselves posing as workhouse children. “We saw lots of flat caps and lace collars, faces with smudges and sad eyes! We were so impressed with the efforts families went to, I am glad the winners were chosen at random as it would be impossible to pick the best,” added Angela. 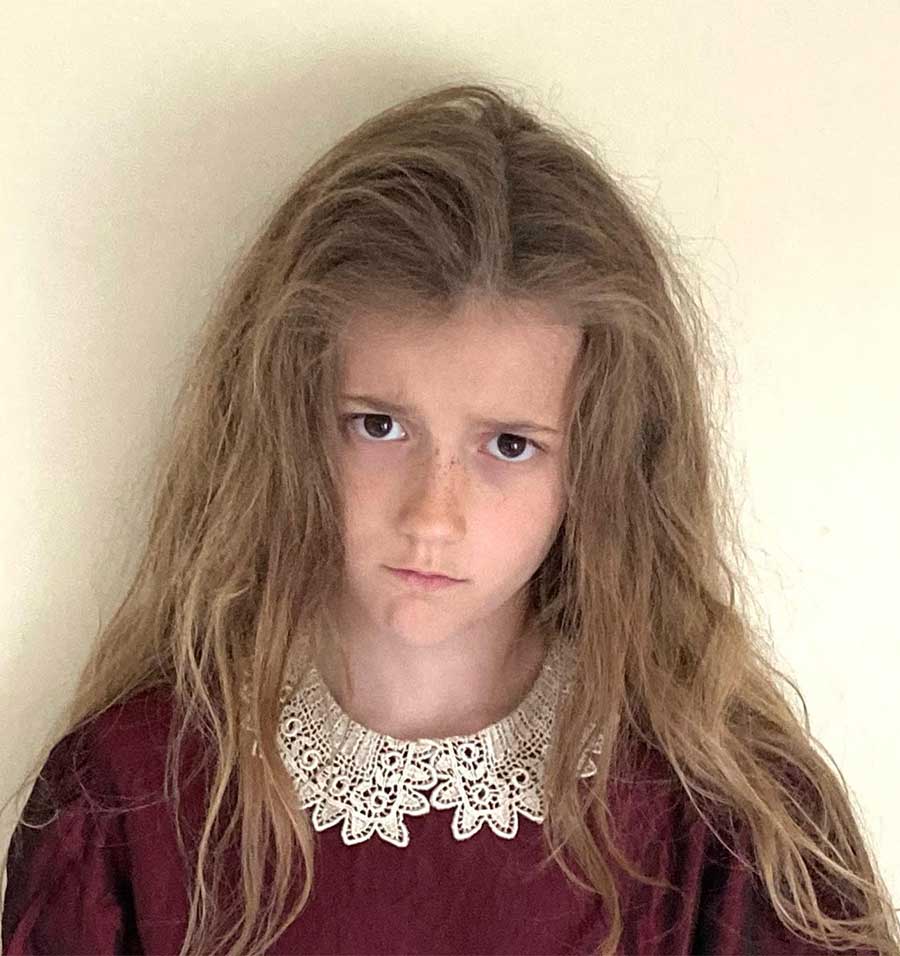 The winner’s photos were transformed into illustrations using Photoshop and appear in the video alongside Louisa’s descriptions of the workhouse children they represent.

Ten of the 25 children Louisa worked with are featured in the video, five girls and five boys. The modern children and their workhouse counterparts are:

Through using wording from Louisa’s actual letters, the new video gives glimpses of the hardships the children went through and the opportunities that the Boarding Out scheme gave them, such as the description of Jane Hustle who “is still so small and short owing to a natural defect, as to make it necessary to continue the allowance for some time longer; but as she has improved considerably of late in strength and stature”, and the assessment of Samuel Ensor: “nine years of age at John Bray’s, labourer of Tealby, doing well at school, and will go to work this summer.”

Dr Caroline Mogg added her thoughts on the project: “Louisa Boucherett provides an excellent example of a local propertied woman who used her considerable power and influence to improve the lives of those less fortunate than herself. Through her pioneering work on the promotion of the boarding out scheme Louisa intervened in the wider public debate about the plight of England’s workhouse children. Louisa Boucherett’s achievements deserve to be celebrated and I am delighted that the Market Rasen Heritage Tour and Website has brought her story to life in such a creative way.”

The Wolds Women of Influence project also has a Facebook page at www.facebook.com/woldswomenofinfluence